Ireland had a mixed experience during the 2022 TikTok Women’s Six Nations but finished the Championship strongly with two wins from their last three games.

Greg McWilliams’ team showed what they can do with wins against Italy and Scotland and finished the Championship with nine points, sitting in fourth above the two sides they beat.

Ireland kicked off their 2022 TikTok Women’s Six Nations in heartbreaking fashion, falling to a 27-19 defeat at the hands of Wales.

They had led 14-5 at the break, but Wales fought back to snatch the win in the closing stages.

Ireland then travelled to France to face last year’s runners-up, a tough assignment at Stade Ernest-Wallon.

Laure Sansus scored a try double for the hosts, who led 26-0 at half-time, but Ireland showed their battling spirit after the break as Eve Higgins crossed with the score finishing 40-5.

Round 3 was a turning point for head coach McWilliams and his team, as they beat an impressive Italy side 29-8 to pick up their first win of the Championship. 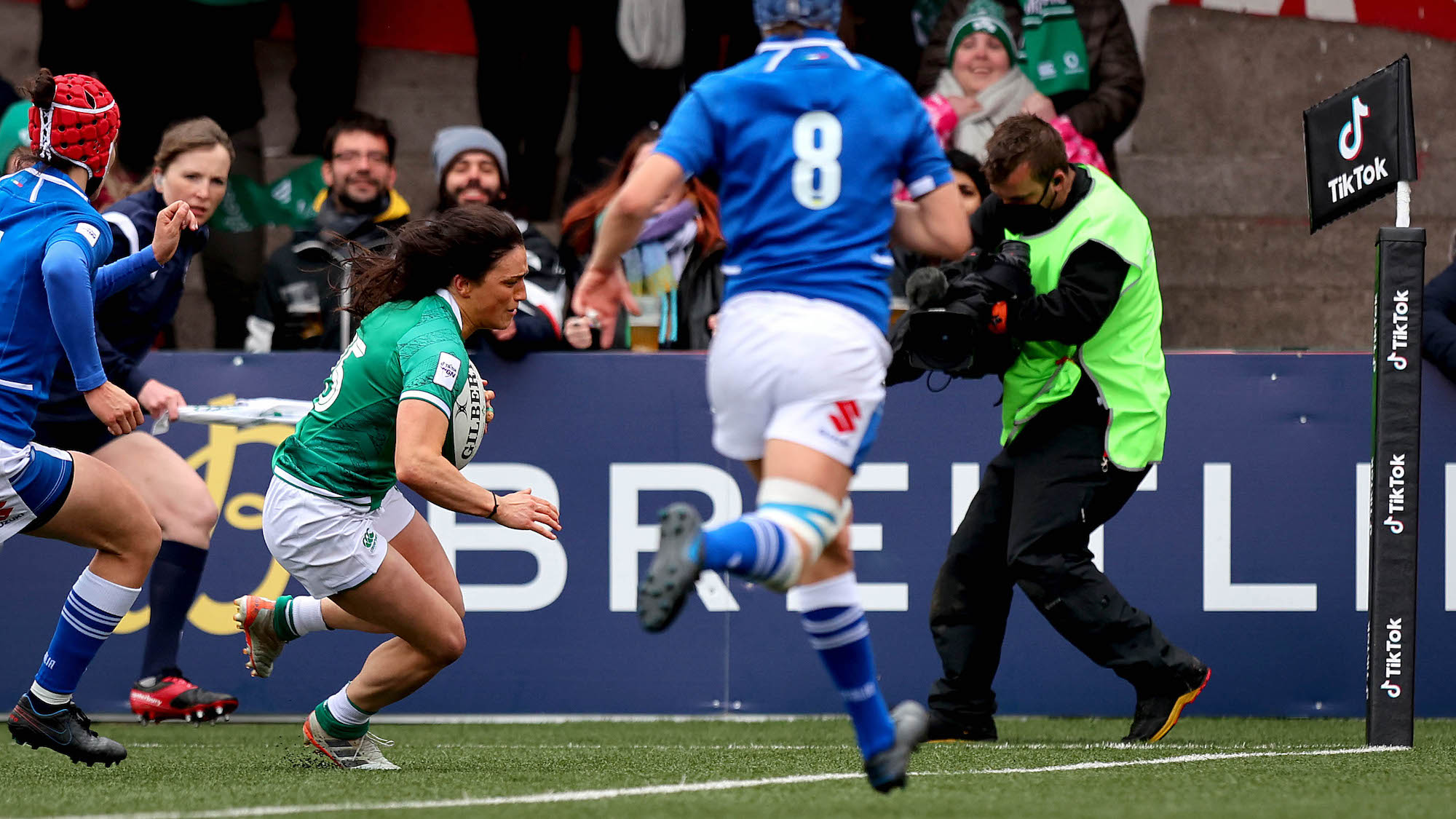 First-half tries from Lucy Mulhall and Neve Jones put Ireland in a strong position going into the break, and they followed it up with further scores from Higgins and Katie O’Dwyer as well as a penalty try.

Next was Round 4 and eventual Grand Slam winners England at Mattioli Woods Welford Road Stadium.

Ireland produced a stunning defensive display in the first half to frustrate Simon Middleton’s side as the Red Roses took just a slender 10-0 lead into the interval but with the help of an impressive array of replacements they eventually ran out 69-0 winners.

McWilliams’ side finished with a flourish on Super Saturday with a last-gasp 15-14 win against Scotland at Kingspan Stadium.

Enya Breen dotted down with time already up, which coupled with her cool conversion, saw the hosts fight back to take the points, having trailed for much of the second half.

Eve Higgins was a shining light for Ireland throughout their rollercoaster of a Championship. 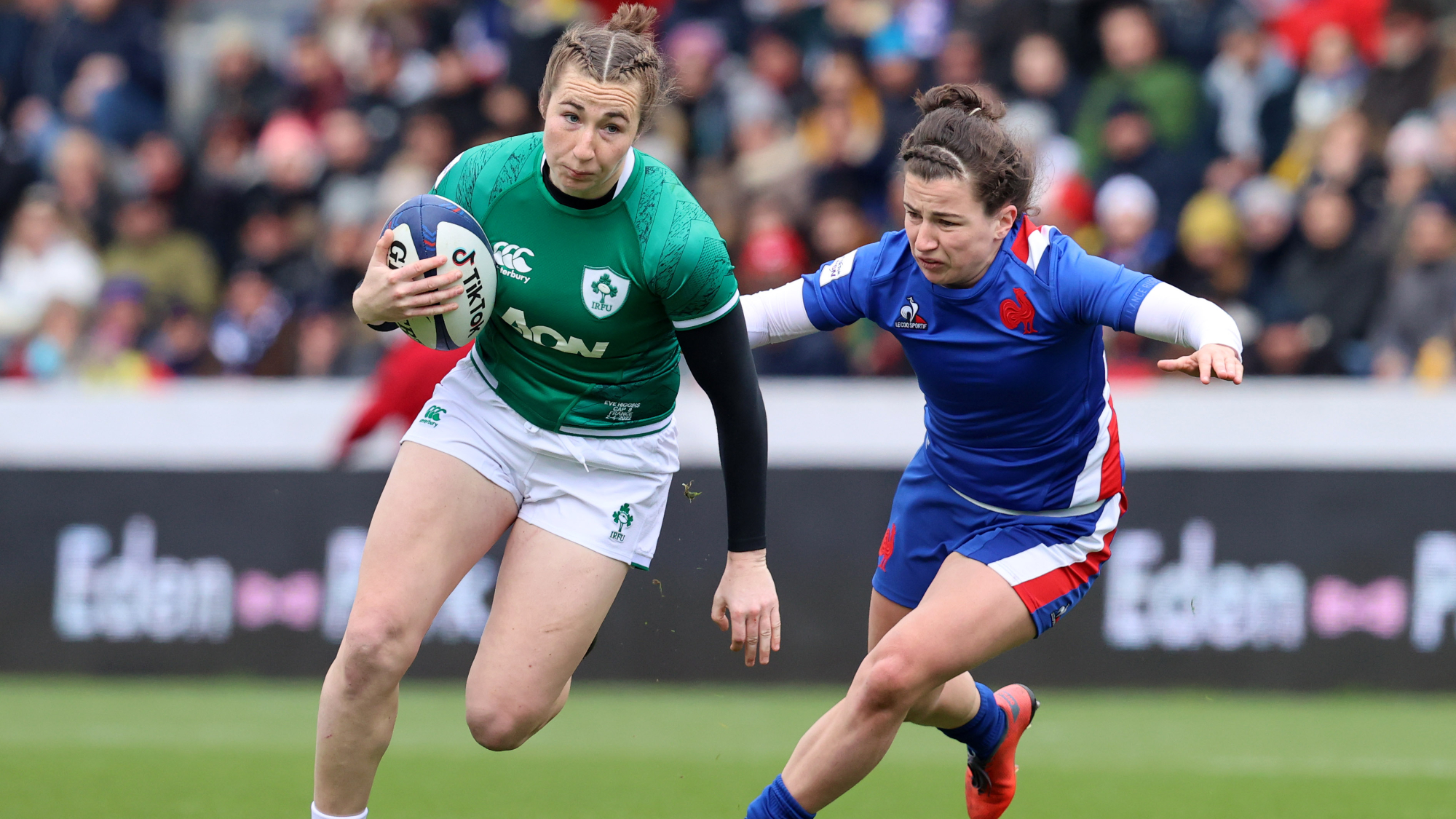 Not only was the centre a threat in attack, but she was also destructive in defence, putting in 18 tackles in her three games.

Add that to her two tries as well as her 17 tackle breaks, and it is easy to see why Higgins was Ireland’s star performer during the 2022 TikTok Women’s Six Nations.

The standout moment from their Championship was Enya Breen’s 83rd-minute try against Scotland that secured a 15-14 win.

Not only did it send the home support into a state of ecstasy, but it also was the perfect way for Ireland to sign off heading into the 2023 Championship.

Breen wins TikTok Women’s Six Nations Try of the Round

It was also voted the Try of the Round with Breen holding her nerve at a crucial time to kick the conversion as well, saying afterwards: “It was just about trusting the process, staying in the moment. 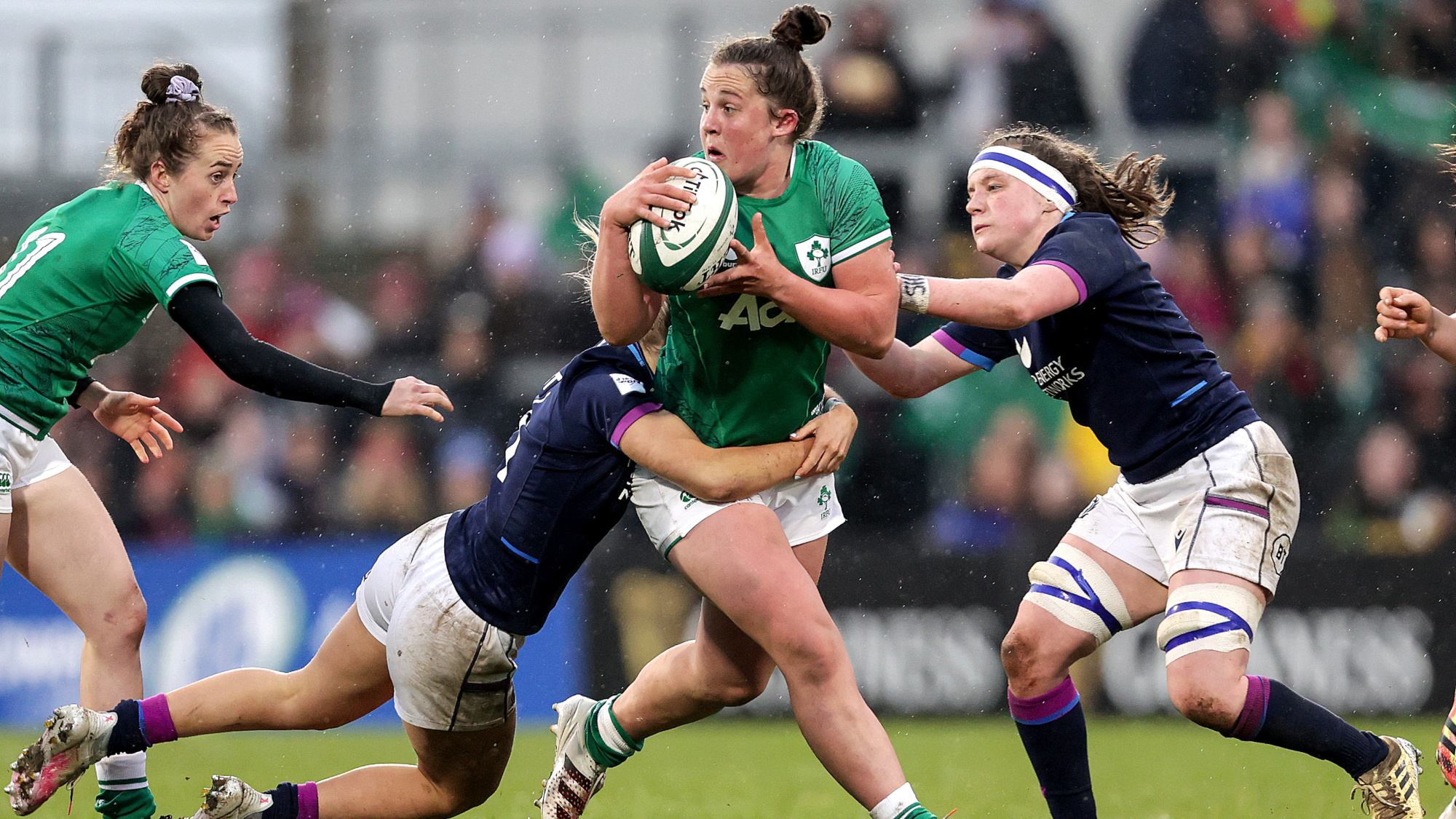 “I knew the pressure was on, but I didn’t want to let that get to me.

“I know I had a kick from a similar position in the first half, and I just pulled it right, so I just aimed it a bit more left. I trusted myself, it’s all I could do really.”

Neve Jones had already made a mark on the international stage but she had an outstanding 2022 TikTok Women’s Six Nations to really show she belongs at this level. 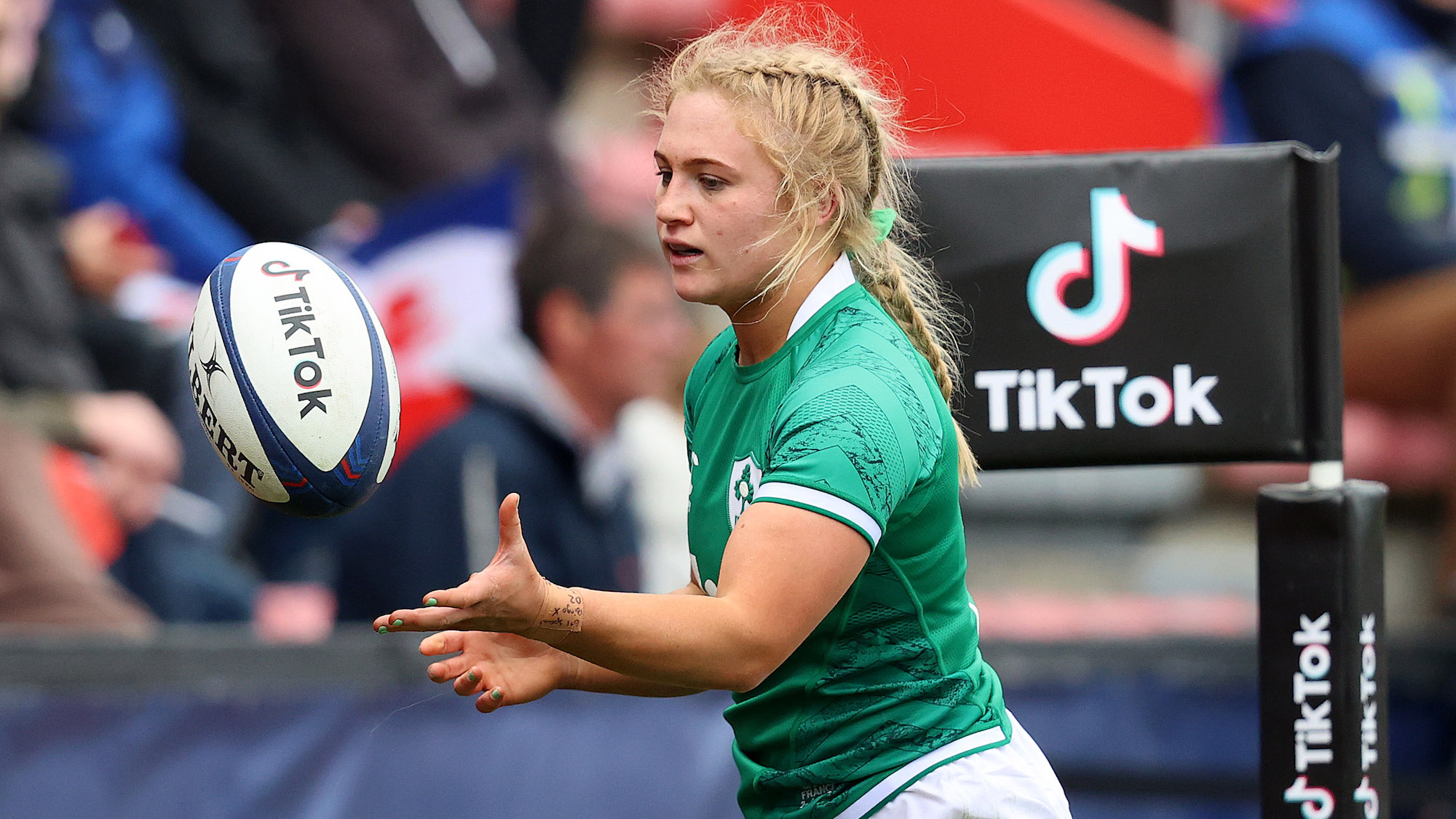 Jones scored two tries during the Championship, picking up one Player of the Match award while also making an astounding 68 tackles across five matches.

The forward has an incredibly bright future, and Ireland will be hoping she can help spearhead a new era of success.

It is a World Cup year, but Ireland won’t be among the teams hoping to make a mark in New Zealand.

Defeats to Spain and Scotland in qualification in Italy ended their hopes of making the finals, and so the win against Bryan Easson’s side would have felt particularly good.

Now Ireland must focus on building the squad’s strength in depth ahead of the 2023 TikTok Women’s Six Nations. 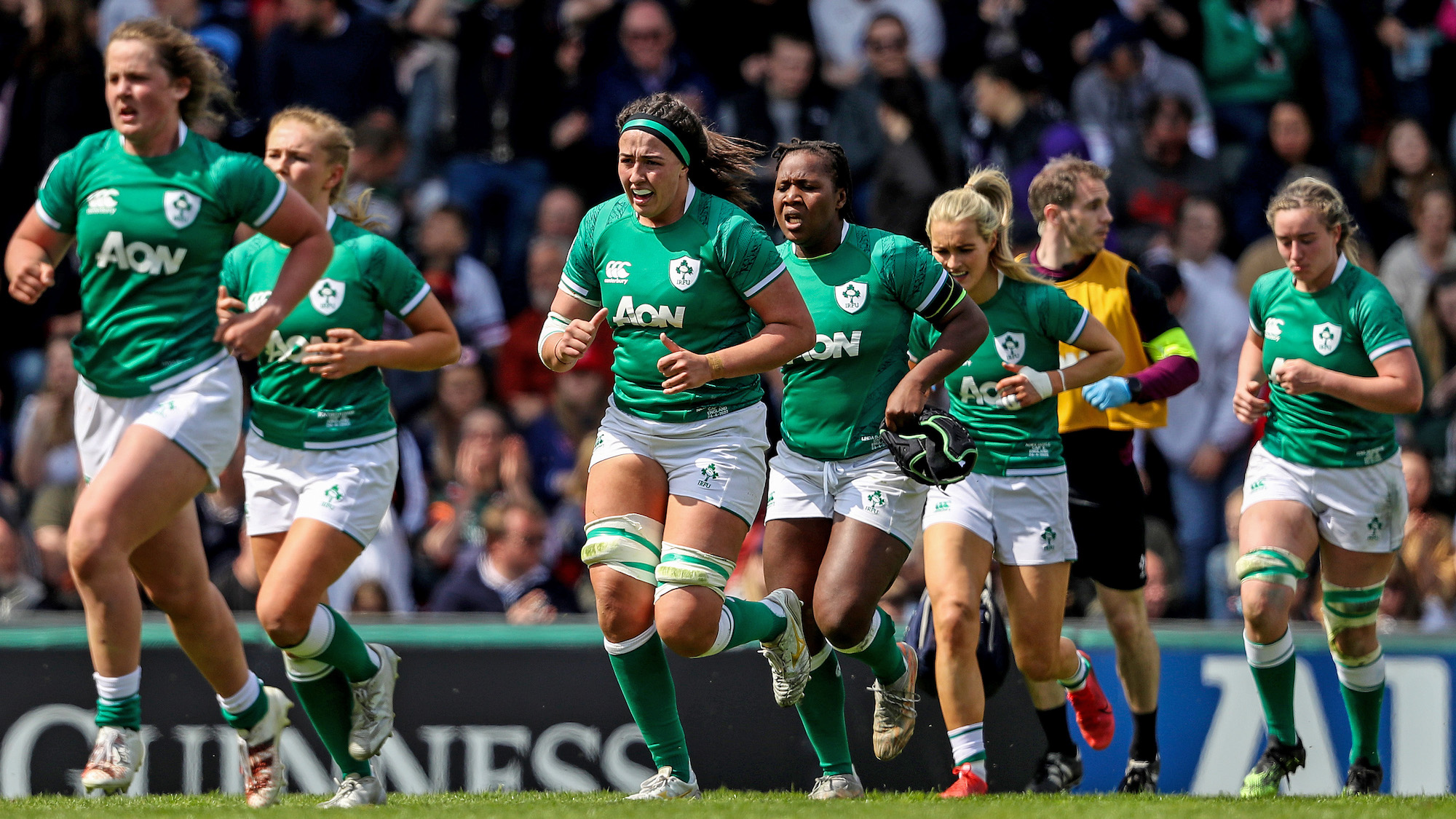 During this year’s Championship, they have shown that they can push the best sides to the limit and now, they’ll be looking to put together complete 80-minute performances on an even more regular basis.

McWilliams has set his side the goal of moving up a place in the table next year, saying: “At the end of the day, next year our goal has to be to get in the top three.

“Keep trying to bring in new players, keep trying to get more time with your players. More camps, the ability to go away for a week here or there. All those moments and all those exposures are going to make us better.”