The Swansea-born star was one of the first dozen Wales Women players to be awarded a full-time professional contract in January and showed why she is so highly regarded with the Try of the Round on the opening weekend of the TikTok Women’s Six Nations.

And having begun her rugby career in secret, Jones is hoping to establish herself as one of the biggest names in the sport when the World Cup in New Zealand rolls around.

“My dad was out in the restaurant, and he could overhear these men saying, ‘have you seen that girl play for Crynant? She’s brilliant, running around the boys,’” recalled the 25-year-old.

“My dad overheard that it was Hannah Jones, so he came back and he found out that I was playing rugby. He was a bit scared about it being too rough for me.

For @WelshRugbyUnion centre @HannahJones_12, it's all about competing to be the best.

“But then he realised, he came down to watch me one weekend and I was the rough one.”

Her father’s fears were eradicated long ago according to 37-cap Jones, but it was her mother who first encouraged her to play the sport she adored.

“I started playing rugby as a child in primary school, absolutely loved the game,” Jones explained.

“My mother took me to the local team and back then my father didn’t really want me to play so she was secretly getting me to go training and I absolutely loved it, figured out I was actually okay at playing so we told my dad and ever since they’ve both been my No.1 fans.”

Jones made her debut for Wales as a teenager in 2015 and scored her first try for her country on Valentine’s Day a year later as Wales beat Scotland.

And the 25-year-old’s love for the game became that little bit stronger after a surprise proposal for her partner, Dino, a former Italy U20 prop, after a game against Canada in November.

“I’ve got a very good support system,” said Jones. “So my circle is very small; it’s family and Dino.

“In our Canada game, in our last game of the Autumns, I text him that morning to say, ‘stay behind for a picture’, because he hadn’t been able to stay because he had been playing himself for Llandovery.

“And he’s sending me to the other side, so I’m going back to my parents and my parents knew what’s happening, he knew what was happening. They just kept sending me back and forth, so I was getting really annoyed at this point.

“I was doing my interview, it was a fake set-up, one from Liz. Then I had a tap on my shoulder, and I turned around to say, what are you doing on the pitch?

“I was absolutely shocked. I am obviously happy now, but at the time it was shock, I didn’t know it was happening.”

Another significant date in Jones’ diary is the start of the World Cup, Jones’ second having been part of the squad which finished seventh in Ireland in 2017.

And the 25-year-old says that the squad have had to remain flexible throughout their preparations, with several of Ioan Cunningham’s side still juggling their rugby careers alongside other employment.

“When we arrive at training, we train at the Vale in Cardiff, we weigh in, it’s monitoring how you slept, how you feeling, how sore you are, they also ask if you’re on your period as that can tailor training for us,” Jones explained.

“We’ve got an hour of skills where we do our performance weeks, where we sit down and write down what’s our focus of this week, what I want to work on going on, say for example, the last game was Italy.

“Because we’re not all professional at the moment, we’ve got to wait for the evening girls to come in after work. So we start a rugby session about seven, eight o’clock and then we’ll have an hour or two hours rugby on the field.

“For me, I’m very competitive, I like to win, everything about rugby is a challenge. I absolutely love the challenges we face.

“My main aim for this year is the World Cup. Not just competing, trying to be one of the best players in the tournament.” 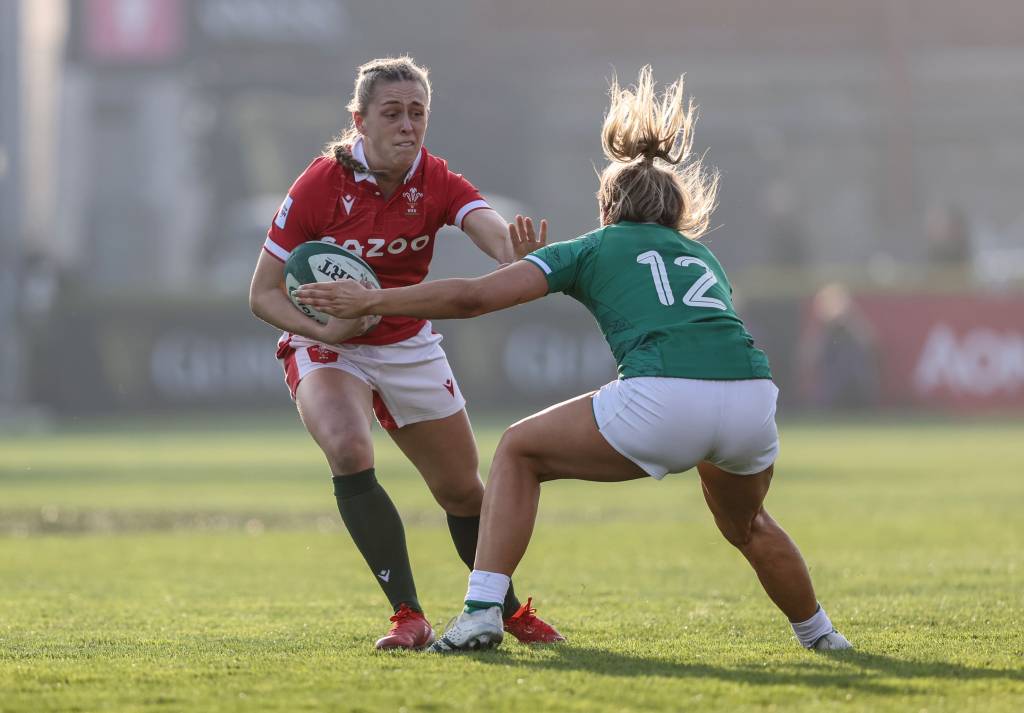 The Gloucester-Hartpury back is a keen student of the game and says she often visualises herself in different match situations to aid her preparation.

“I like to picture going through moves, I often close my eyes on the bus and think what’s my first action going into the game.

“If we receive kick-off, what are we going to do? I’m looking at the opposition, their scrums, their lineouts, what type of moves they run within the 22, if we find ourselves on our line. I look at my opposite centres, 12 and 13 and what the fullback does.

“Where there’s a kicking opportunity for me as a centre or something new, I’m bringing to my game now. So I’m definitely working hard on that.”

And ahead of the World Cup, Jones admitted that her own path to the top was not always straightforward, but that she could not imagine what her life would be like without rugby.

“My mentality is really not to give a reason to a coach not to pick me. Every element of recovery strength, fitness, rugby, just try and keep pushing. I know I’ve got the time to do it, I’m just loving it. A dream come true this job is,” she beamed.

“Before becoming a professional, there were a lot, lot more sacrifices, career sacrifices, money sacrifices. Obviously wanting to be the best athlete you can be, I had to find a job that suited and worked along with rugby. My main focus would always be rugby, nothing would come in front of rugby.

“Obviously playing with your friends as well, I’ve met my two lifelong best friends from it, Alisha [Butchers] and Jaz [Jasmine Joyce], who will hopefully be my bridesmaids. So, also the friendship side of it as well.

“For me, that jersey is never your own. So you never know when the last time you’re going to put that shirt on is. Due to injury, due to selection, you just don’t know. It’s a massive honour, massive privilege, to have that jersey. I never want to lose, always want to win. For me, it’s everything.”