Sioned Harries admitted it was “surreal” to be able to train on a full-time basis with Wales just a year after thinking she may never play for her country again.

Harries, who holds the Welsh World Cup record for most tries was a high-profile absentee when left out during the 2020 and 2021 Women’s Six Nations campaigns but returned this year to inspire Wales to a third-place finish, their best since 2009.

The 32-year-old star began training on a permanent basis with her country in the summer, and though she is not one of the 31 contracted players, she believes the newly established professional environment will benefit Wales Women for years to come.

“It felt a bit surreal to start off with,” said Harries. “Previously when I was training with Wales I was so used to going back to work afterwards, I always had to balance work and rugby.

“So to be able to train full-time has been a bit surreal at times but I’ve thoroughly enjoyed it. It’s a different mental challenge, Ioan (Cunningham) has been testing not only our physical and mental abilities but also our resilience which I really enjoy.” 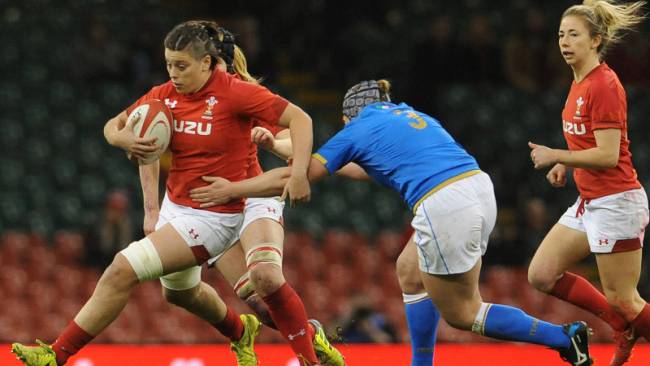 That step-up in intensity could not have been any timelier, with the World Cup in New Zealand taking place this autumn.

And ahead of her fourth tournament appearance, Harries said that both she and the wider squad have felt liberated since the contracts were issued.

“I’m able to invest more into training so I’d say I’m probably in the best shape of my career but even more important than that is the accountability that is now required of us,” she explained.

“There are no excuses, which is exactly what we want as players. There has been a lot of public support for us since the first contracts were announced.

“We were always told we were inspiring the next generation but for the first time that feels like a reality.

“These contracts are an extra carrot, not only for us but for the next generation. We are all able to give another three inches and if we want to be the best, we have to demand the best of ourselves.”

Wales have not finished higher than seventh in any of Harries’ three World Cup appearances to date but an unlikely win against New Zealand in the quarter-finals would secure a best tournament finish since 1994.

Looking beyond the World Cup, Harries is mindful that it will take time for the squad to truly reap the rewards of professionalisation and to bridge the gap to England, New Zealand and France – the first three countries to award full-time contracts.

“The time and money invested into us will allow us to improve and grow but we are still behind other nations who started ahead of us, we have to understand that but keep striving to move forward,” she said.

“Proof of that is the fact that Ioan has signed a contract until 2025. We are on the right track and it’s about time.”

Head coach Cunningham’s new deal will see him remain in post until after the next World Cup, which takes place in England in three years’ time.

But the immediate focus is finishing this year’s tournament strongly, one that carries extra significance for Harries given her prolonged absence from international rugby.

“It means a lot to get to New Zealand. It tastes sweeter after being out of the squad for three years,” she added.

“I’m excited for those getting their first World Cup experience and hopefully those of us who have been to a few can also share their experience.

“I’m able to train full-time so it’s a World Cup where I have high expectations for myself and I want to make myself, my family, my teammates and my friends proud.”